We all know that cricket bats need oiling. Kookaburra Cricket have a great article on their website about how to oil bats and why.

The moisture content of bat willow is a key element to a bat being a good bat or a not so good bat. Bats are ordered by retailers on a seasonal basis. Bats for southern hemisphere regions are ordered in January and February and for northern hemisphere regions in November and December. This is because bat manufacturers need to have sufficient time to manufacture them and to ship them  to the various regions in time for the preseason sales period. So in effect your brand new bat might be 6 months old before you buy it or even older. Therefore the cleft used to make your bat has most likely been air dried and even kiln dried seven months prior. Willow is a natural product. In the natural state it has a moisture content level of around 50%. Post drying and prior to shaping and pressing a cleft would have a moisture content of around 12%.

Bats in general need to be oiled for a number of reasons. Moisture retention is one reason but other factors such as surface sealing and cellular pliability benefit from a bat being oiled.

Conventional methods of oiling include applying a thin coat of oil to the face of a bat as well as the back and the edges. For new bats this process needs to be repeating around 5 times to coincide with knock in and hitting softer balls.

Here at Force Train Better we have been reviewing the effects of oil on bats. As part of the review  we looked at a number of bats, most of them under six months old, that had split. Interestingly in all cases the split appeared from visual inspection to emanate along the edge of the bat or from the face of the bat extending into the middle regions. It was also notable that all splits occurred when the volume of timber was greatest. By this we mean the cracks lined up with the “middle” of the bats. Subsequent moisture reading tests indicated a large variance in the moisture content between the timber from the mid section as against the outer surface areas. In some cases the variance was in the region of 10% to 15%. Sections of cuts were taken from higher up the bat where the volume of timber was less. The moisture content in these regions were very close; almost the same; between the surface and the core. Among other things the research suggests that crackers occur and indeed are most likely to occur in sections of bats where there is a denser concentration of timber by volume. This is arguably because of the variance in moister content.

In order to combat this we looked at ways or methods that would ensure oil is used to limit moisture loss from the bulkier sections of bats. A method of inserting “oil ports” in the back of the bat that have a 4 mm to 6 mm shaft extending to within 20 mm of the bat face was the most logical that we reviewed. The ports allow for the oil to ingress to the inner regions of the bat and for the oil to move laterally and down into the sections immediately above the face of the bats. Ideally this would be done when the bat is new and maybe updated every two months. The oil does not sit in the port holes for long. In fact it is generally taken up by the bats within a few hours.

As a consequence Force Train Better will soon be modifying all of our bats to include two to four port holes on each bat. We believe this will see less cracks occurring with new bats and bats in general having a longer usage time span.

Email us at enquire@forcetrainbetter.com if want to know more. 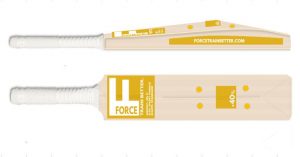